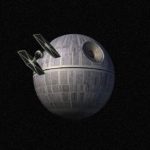 Last week we talked about intestinal mucus – an electric fence in our gut.  We hope you’re not still reeling from the number of times we use the word ‘mucus’.  Spoiler – there’s more to come here!

This week we are talking about specific mucus-type layers that are produced by bacteria and fungus. This is called a biofilm and microorganisms use this to hide themselves away from our immune system and protect themselves from antibiotics or antimicrobials that we might be using to get rid of them. It’s really very clever, it’s no wonder these guys are so tricky to get rid of.

Bacteria or fungus like to live together and form little cities – there’s strength in numbers. They stick together by producing this mucus-type layer which acts then like a forcefield around their city.  We have an electric fence – but they have a force field! Yes, it’s the Death Star in your gut.

If you’ve ever watched Star Wars, you’ll know that the key to defeating the Death Star is to disrupt the force field. This is one reason why seemingly effective protocols, antibiotics or anti-fungals don’t seem to do what they say on the tin.  It might help to try to disrupt the biofilm first before pursuing a protocol.  There are a number of supplements that have been shown in the research to act as successful mucolytic agents – which means they break down the force fields. One such is N-acetyl cysteine which is an incredible substance with many functions in the body.

If you are looking to mount an attack on an infection or overgrowth in the digestive tract, prepare your army first. Know your enemy, we have useful tests that might help here.  And talk to us about an appropriate protocol.  We can liaise with your doctor, even Luke Skywalker didn’t fight the Death Star alone.