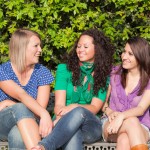 This might be a very wet August but you still have time to boost your natural vitamin D levels if you get out there!

Can you make vitamin D on cloudy days?

We don’t need the sun to be splitting the stones to be able to make vitamin D.  Even on a cloudy day, there should be enough UV rays to make vitamin D in the skin.  That’s during the summer months only though.  Studies in Boston show that us humans can make vitamin D quite well between March and October.  Did you know that Dublin is on the same line of latitude as Nova Scotia though? We are much farther north than the cities where much of the data is researched in the US.  Farther north means less UV penetration.  We heard in the news just days ago about the GP in Donegal who examined 10,000 referrals for vitamin D tests. A whopping 75% of patients were vitamin D deficient in Donegal.

What to do now?

With the remaining weeks in August and September, get out in to the light as much as possible.  Expose limbs and face to sunlight, even through clouds, particularly during the peak hours of midday to 2pm.  Get those kids out too, they need vitamin D for developing strong bones.  If the sun does make an appearance, consider exposure of unprotected skin for 10 minutes.  Then cover up or apply sunscreen to protect vulnerable skin from burning.  It is thought that much deficiency in young children is caused by applying high factor sunscreen before any exposure at all.  Another factor of course is staying indoors too much.  This has caused an upsurge in bone problems such as rickets in children in the UK and Ireland.

Vitamin D is fat soluble so the best thing to do is to try to store up what you make naturally in the summer.  Often we don’t make sufficient amounts however to last us all winter long.  This is especially true in northern countries like Ireland.  Our stores will begin to deplete in October and by the time March comes, we are at our lowest.  It is critical for bone health but also plays an important role in your immune system.  If you know that winter is a time for colds and flus for you, it may be worth considering this vitamin.  Vitamin D is also important in fertility and studies have shown that conception rates are higher in summer months.  If you hoping to get pregnant, discuss your vitamin D requirement with us.

How much to supplement?

Many people may chose to boost their vitamin D with a supplement during the winter.  Usually a dosage of 800-1000IU is suitable for most people to top up their levels.  All children under 5 should receive 400IU daily anyway for bone health. Some people may need greater amounts but over-supplementation carries risks also.  Too much  can be toxic.  Even at levels that might not be considered very excessive, it can have a negative effect on the immune system.  The best way to know how much you need is to test.  Our Nutritionists can then tailor your dosage according to exactly how much you need.

Slimming products – too good to be true?

Sales of slimming products and meal replacement shakes continue to grow.  But do they work?  And are they even safe?  Watch Heather give her views on Virgin Media’s TV AM this Friday or read more here

Going vegan is here to stay. But is it really healthier?  Can we get what we need from food?  And is it actually a more sustainable option?  Read more or keep an eye out for Heather on Virgin Media this Saturday.