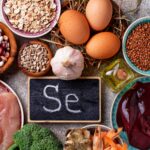 The thyroid tissue has the highest concentration of selenium in the body. Glutathione peroxidase enzymes are the most abundant antioxidants in the thyroid.  These are the protector of our thyroid cells and they are made of selenium and protein. This nutrient is there to protect our thyroid as explained in our previous blog, but it is also helpful when our thyroid is already damaged.

Let’s take a look at supplementation of this nutrient in autoimmune thyroiditis. This is  where you have Hashimoto’s disease, Grave’s disease or perhaps you have measured positive for raised thyroid antibodies.  We know that selenium plays a key role in anti-inflammatory pathways.  Blood concen­tration can decline in inflammatory diseases, even mild infections and inflammation.  There are a good number of studies showing that selenium supplementation is helpful in autoimmune conditions, not just autoimmune thyroid conditions.

Let’s start with Hyperthyroid cases such as Graves disease.  A well designed multicentre trial (1) supplemented with 200ug selenium and showed a marked improvement in quality of life and significant improvement in eye involvement in 70% of patients compared with medication.  No adverse events in selenium group where there were in the medically treated group.

In Hashimoto’s, there have been a number of studies, with variations but all saying pretty much the same thing. In 2002, one study (2) showed that supplementing with 200ug selenium for 3 months decreased antibodies (anti-TPO) from 900 to 600 IU/ml . This is about the same kind of decrease we see in our clinic in 3 months. One quarter of patients in the treatment group had complete normalisation of their antibodies and thyroid ultrasound.

In 2003  a study (3) of 75 patients including controls showing a reduction in anti-TPO antibodies from 1900 to 1000 IU/ml in 3 months and further to 844 in 6 months. Then a really nice study (4) in Turkey in 2006 used different doses and changed doses in some groups over time.  This study suggested that 200ug works better and the higher your antibodies, the sharper the decline which is good news. On average they saw reductions from about 800 to 570 IU/ml.  TPO antibodies actually increased with 100ug  which was then reversed after increasing the dose to 200ug again which was a very interesting outcome.

It is important to note though that 200ug of selenium is quite a high dose and should be recommended only by a Nutritionist. Typically in Ireland, selenium deficiency is not that common, so what happens if you give too much selenium? There may be risks for diabetes mellitus and dyslipidemia (high fats or cholesterol in the blood). Mice studies (5)  show that elevations of selenium might interfere with insulin signalling, induce insulin resistance and obesity.  There are a couple of human studies in US and UK also which indicate the same could be true in humans. So we do need to watch for excessive supplementation of selenium – once the antibodies are reduced, you need to stop the supplementation and you should not take this supplement for an extended period of time.

As regards supplements, selenomethionine seems to be more effective than sodium selenite but selenomethionine increases selenium in all tissues. And there is no max saturation here, selenium is continuously absorbed. Notably the tissue build up might be more important in men than women. Given thyroid conditions  are more common in women, that might be a saving grace.

Tips to boost your energy or get to the root cause of your fatigue, from Heather Leeson on Virgin Media Weekend AM