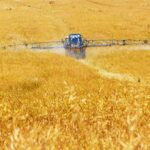 The market for organic food grew even more quickly during the Pandemic as more of us looked at ways to support our health. But given the potential cost implications, is eating organic a good health investment? Heather explains more below including how to reduce pesticides of non-organic food.  Or watch her on Virgin Media Weekend AM.

Leaving aside the potential positive impact of organic farming on soil health and the environment and looking at it from a purely nutritional perspective, it’s true that the evidence on the nutrient levels of organic vs non-organic food is mixed.  While some studies show that organic produce has higher levels of vitamin C, magnesium, iron and plant polyphenols, others show that the nutrient content of non-organic food is similar to that found in organic versions.  So, in this area, the evidence does not always stack up, yet…..

But it is a fact that organic food has lower levels of pesticides, hormones and other chemicals. For us, that is one good reason to choose it. While chemicals in food are tested individually, we eat dozens over the course of a day.  Long term safety data on this chemical cocktail is not known.

Chemicals thought to be safe can be subsequently banned as evidence of harmful effects emerges. One good example is the mounting evidence against the herbicide Roundup. This contains the chemical glyphosate, which was classed as a probable carcinogen by the WHO in 2016  It is now banned or being phased out in some EU countries, although not Ireland yet.  It’s manufacturers Bayer have paid out billions of dollars to settle almost 100,00 cases in relation to negative health effects.  A 2016 study found that the amount of the chemical glyphosate in urine had increased by 1000% over 2 decades. Another study in France showed that quantifiable levels of glyphosates were found in 99% of the French population.  Our exposure starts early in life, with one study finding more than 200 chemicals in the umbilical cord blood of new-born babies.

A study in the British Journal of Nutrition also found that non-organic produce has higher levels of potentially harmful heavy metals like cadmium, due to fertiliser use.  Organic farmers can only use naturally-derived pesticides and fertilisers, no routine antibiotics or hormones, no artificial colours or preservatives and all lifestock is free-range.

Some studies seem to show that organic food has some health benefits, like a recent French study which showed a lower incidence of cancer in those eating more organic food and other studies showing reduced incidence of obesity. Much as we like organic food, even we have to admit that this data may be slightly skewed. Many people choosing organic food may already be making healthier food choices.

What are the downsides of organic ?

Cost and availability are really the only downsides, but of course they can be a major factor!

Options can be expensive as this type of farming relies on more labour-intensive practices.  Certification is costly.   Availability can also be a challenge.  All supermarkets now have some organic food but stock can be limited.  One way of getting around the logistics is to order a veg box, even for some of the year. There are lots of options available, like The Hopsack, Green Earth Organics and organicfruitsandvegetables.ie. This also helps to make sure you are getting a variety of healthy veg and fruit and eating more seasonally.

It’s not just about organic, it’s about making the best choices for you

These days, you can buy an organic version of almost everything and you are kidding yourself if you think that eating highly processed organic food is a healthy choice. Organic crisps or jellies are going to benefit your health just as little as non-organic.  Replacing these with a non-organic but more nutritious choice like an apple would be better for you.  It’s more important to eat a healthy, whole food diet with plenty of veg and fruit rather than restricting yourself to organic only, if that is going to limit the variety of healthy food you eat.

Buying Irish is a good choice

(full disclosure, my Dad and brothers are Irish farmers!)

Luckily in Ireland much of our food is much less heavily sprayed and intensively farmed than in other countries.  Strawberries farmed in some countries like the USA are usually at the top of the ‘chemical cocktail’ list. Farm workers need to wear full hazmat gear when spraying or even harvesting the fruit.  But that is a world away from our own fantastic Irish strawberries. These are grown using much fewer pesticides and chemicals.

Some studies show that organic dairy products have more healthy unsaturated fats than non.  This may be because they are pasture grazed.  Irish cows spend most of the year outside feeding on grass, unlike more intensively reared dairy herds in other countries.

Buying Irish usually means that we are buying in season too, which has environmental and nutritional benefits.  Organic veg or fruit transported across the world is going to have a higher carbon footprint and possibly a lower nutritional value too.

Wash your produce to reduce chemicals and extend shelf life

If you are buying non-organic produce, washing them well can help to reduce chemicals present in the skin and extend shelf life.  Products like veggi-wash, available in health food stores, are much more effective than water alone.  Or make your own cheaper home-made wash,  shown to reduce chemicals. Simply mix baking soda or distilled vinegar in a basin of water and leave your fruit and veg to soak for 10 minutes. Then rinse and allow to dry

The overall message is that where it is a viable option for you, it is a good idea to include at least some organic choices.  This could be especially useful if you or family members only eat a small selection of produce.  For example, if  you or your child will only eat apples, then buying at least some organic apples might be a good idea.  Otherwise, choosing Irish, seasonal produce is a better option than produce that has been more intensively and potentially more chemically farmed elsewhere.

And most importantly, do your best to eat a healthy diet rich in veg, fruit, whole grains and healthy protein.