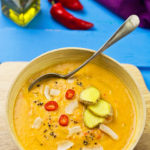 Going vegan is having a moment, with celebs from Arianne Grande to Bill Clinton singing the praises of avoiding all things animal.  But is it really as healthy as it seems? Read on to find out more, learn what to watch for on a vegan diet and get our one-day vegan meal plan with recipes (including our favourite coconut lentil soup).

A vegan diet avoids anything derived from animals, including meat, fish, dairy products, eggs and even honey. This also rules out fresh pasta made with egg, foods with animal-based additives like cochineal (a red food colour made from beetle shells found in some red or pink foods) and of course gelatin, found in jellies and other chewy sweets.  Many wines and beers are also off the menu as a product called isinglass, derived from fish bladders is often used in their production.  Even some supplements like vitamin D can be an issue.

So what can vegans eat?

Any plant-based food is on the menu.  So many vegan diets are high in vegetables and fruit.  Vegans can also eat grains, pulses like chickpeas and lentils, nuts and seeds, soya products and of course the myriad of vegan products now available, ranging from soya yoghurts to vegan chocolate bars and vegan cheese.    It is possible to have a varied and interesting vegan diet, but it’s hard work and choices are still limited when eating out.

Is it really better to be vegan?

From a sustainability point of view, we are probably going to have to adapt to eating a lot less meat whether we like it or not.  For now, eating more plant-based meals and including plenty of vegetables and pulses is undoubtedly a positive health step.  Pulses such as lentils, beans and chickpeas are high in fibre, reduce cholesterol and may reduce your risk of colon cancer and heart disease amongst others.

But going vegan can be a challenge. Everyone has different requirements.  Some people may thrive on a vegan diet, while others will struggle to get what they need.  A vegan diet does restrict many healthy foods and can make it harder to get all the nutrients you need.  And of course, you can eat a junk-food vegan diet with lots of processed food.  For example, most vegan cheese replacements are highly processed vegetable fat.

Nutrient deficiencies are common in vegans

The most difficult nutrients to get enough of on a vegan diet are those we usually get from animal products: vitamin B12, iron and omega 3 essential fats.

Vitamin B12 is predominantly from animal products

A vitamin B12 deficiency can give you symptoms like fatigue, weakness and memory loss.  It’s found in very small amounts in nori seaweed, tempeh (fermented soya bean), nutritional yeast and in fortified foods like plant-based milks.  It is the one nutrient that most vegans do need to supplement longer term and we recommend having your levels checked.  This is especially  important for children, pregnant mothers and infants being breastfed as deficiencies in these groups can have serious consequences.

Vegan diets are also naturally lower in iron and the form of iron found in animal products is more easily absorbed than plant-based iron.  Iron deficiency causes symptoms like fatigue, hair loss and breathlessness.   However, there are many plant-based sources of iron, like green leafy vegetables (think  Popeye with his spinach), lentils, beans, nuts and wholegrain cereals.  Vitamin C helps to increase iron absorption so it’s helpful to include plenty of fruit and vegetables together with iron-rich foods.

While flax seeds, chia seeds and pumpkin seeds do have small amounts of omega 3, we get most of our omega 3 from oily fish and even fish supplements are off limits for vegans.  It can be difficult to source good quality vegan omega 3 supplements with enough of the active ingredients EPA and DHA to support a healthy immune system, brain and heart to name some of the benefits.  Learn how to check your levels of omega 3 and other vitamins and minerals.

We need protein to build and maintain muscle and to keep us full.  Many of our ‘normal’ sources of protein are animal-based, like meat, fish, eggs and dairy products.  Getting enough vegan protein can be a challenge, especially for those who are very active.  Good sources include lentils and beans, nuts and seeds, tofu, quinoa.

Pulses and wholegrains, the mainstay of many good vegan diets, contain anti-nutrients called phytates, which prevent us absorbing and using some minerals, especially iron, zinc and calcium.  Vegans can get around this by soaking, fermenting and sprouting, but need to know their way around the kitchen to get the most from their food.

Key things to bear in mind

Vegan menu plan for a day

You don’t have to go the ‘whole hog’, but dipping your toe in the water by having a couple of meat-free days a week is a great way to improve your health and the planet.

January is always hard to face and with current news, it feels even harder this year. Food and lifestyle can have a profound effect on our mood and wellbeing and it does not need to cost a fortune or take a huge amount of effort to start reaping some benefits.  Watch Heather share tips on Virgin Media Weekend AM or read more.

Whether getting ready for kids to go back to school or to get back into the office yourself, you may need some lunchbox inspiration.  Check out our healthy lunchbox handout or watch Heather in action on Virgin Media Weekend AM